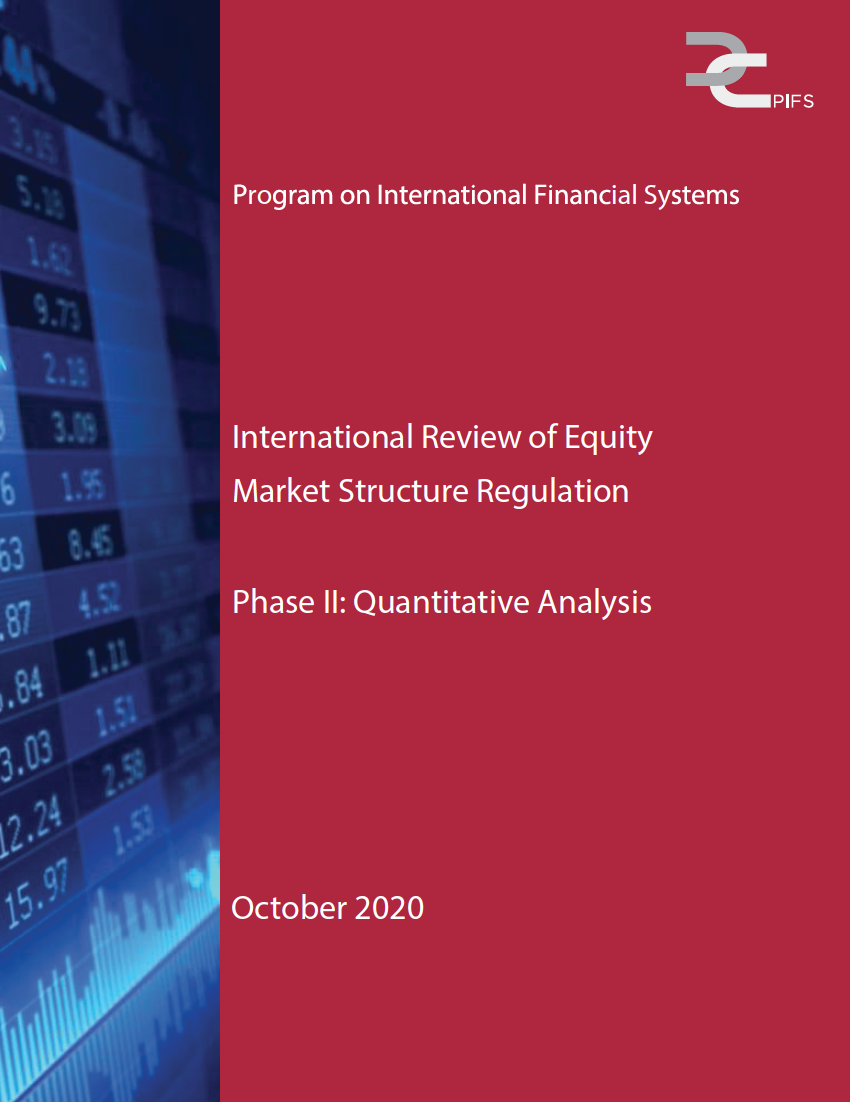 Comparison of Virtu and AbelNoser Datasets

Phase II of PIFS’ international review of equity market structure regulation sets forth a quantitative analysis of equity markets in the People’s Republic of China (including both the Mainland market and the Hong Kong Special Administrative Region),1 the European Union, Japan, and the United States.

In Part I: Market Characteristics, we present summary statistics as to trading volume in each market, including recent trends and the share of on-exchange and off-exchange trading from 2011 until the end of 2019. We also address the relative share of trading volume attributable to institutional investors as compared to retail investors and compare trade sizes in each market. We find that on-exchange trading volumes and the share turnover ratio in Mainland China have significantly increased since 2011, as compared to the other four markets. We also find that a significant percentage of trades are executed off-exchange in the E.U. and U.S. but not in Hong Kong or Mainland China.

In Part II: Comparative Analysis of Trading Costs, we review non-public datasets from Virtu Financial and AbelNoser, two leading global providers of transaction cost analysis, to assess the performance of global equity markets for institutional investors. We have not been able to identify data to compare retail trading costs across markets, however, as demonstrated in Part I, the majority of trading volume in the E.U., Hong Kong, Japan and U.S. markets is institutional. In Part II, we evaluate changes from 2015-2019 in each of the markets as to institutional order size, brokerage commissions, price impact and overall trading costs. Three key findings are apparent from our review. First, price impact costs are the primary driver of overall trading costs for institutional investors across all five markets. Second, brokerage commission costs have significantly declined across all five markets and overall trading costs have also generally declined in recent years. Third, the United States has the lowest overall trading costs of the five major markets.

On-exchange trading volume in global equity markets are dominated by five markets: the E.U. (including the U.K.);  Hong Kong; Japan; Mainland China; and the United States. As demonstrated by Figure 1, these markets accounted for approximately 87 percent of on-exchange global public equity trading in 2019 by dollar volume. 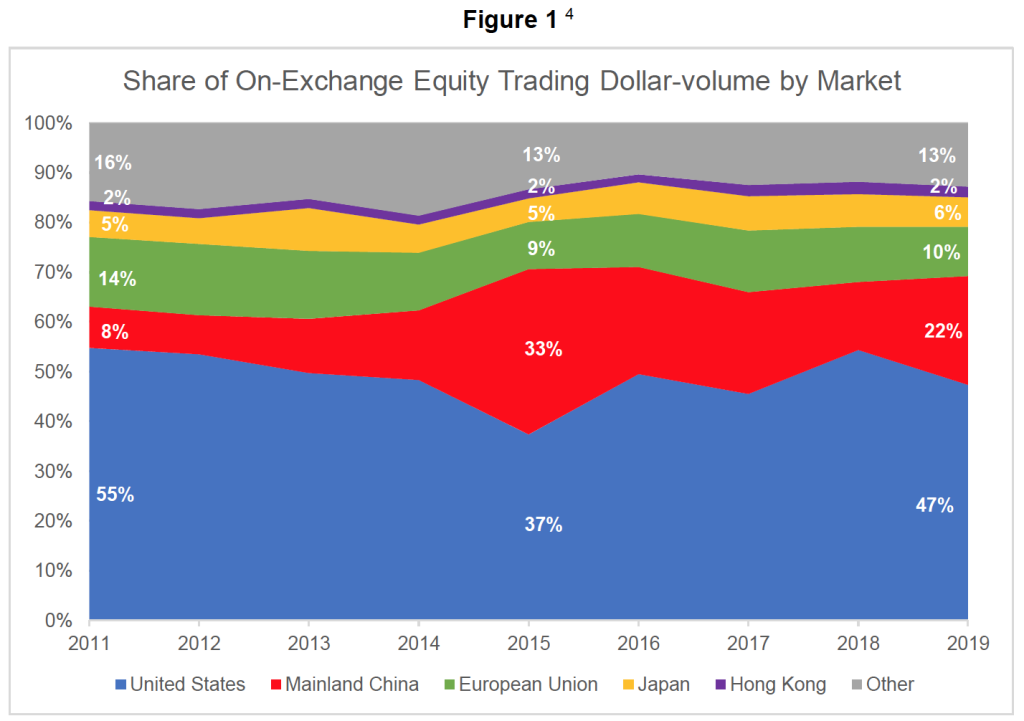 As demonstrated by Figure 2, total annual on-exchange global trading volume across all markets rose by 9 percent between 2011 and 2019, from $80.2 trillion to $87.2 trillion. Figure 2 also shows a significant increase in overall on-exchange trading volume in Mainland China from 2011 to 2015 followed by a significant decline from 2015 to 2019. The surge in volume coincided with a bull market in Chinese equities that peaked in June 2015, with the Shanghai Composite Index exceeding 5,100 before declining below 2,800 by January 2016. 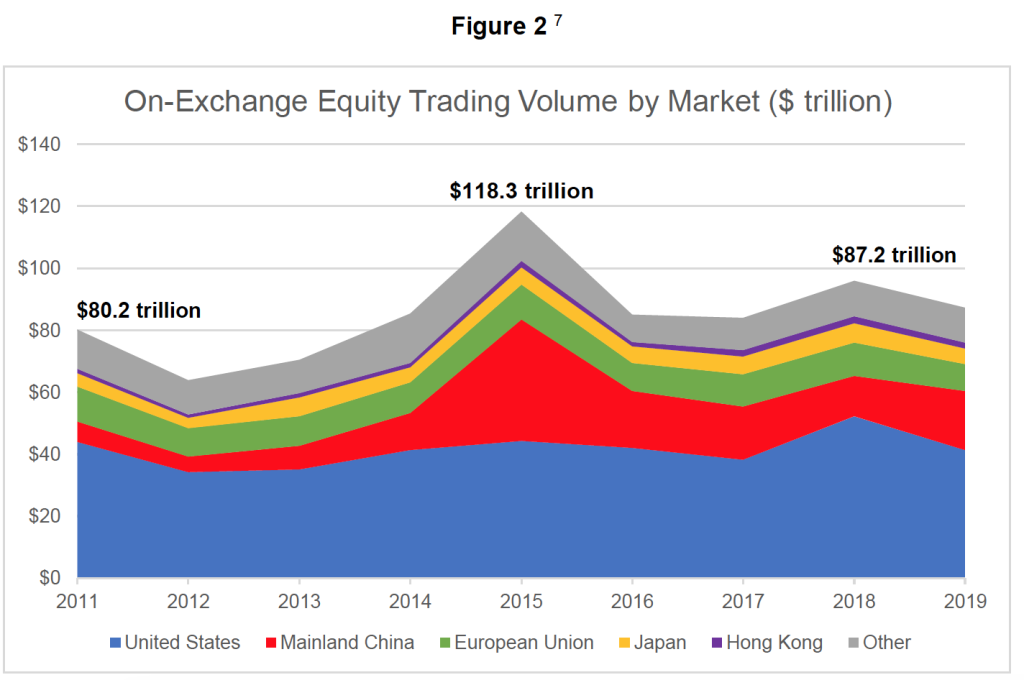 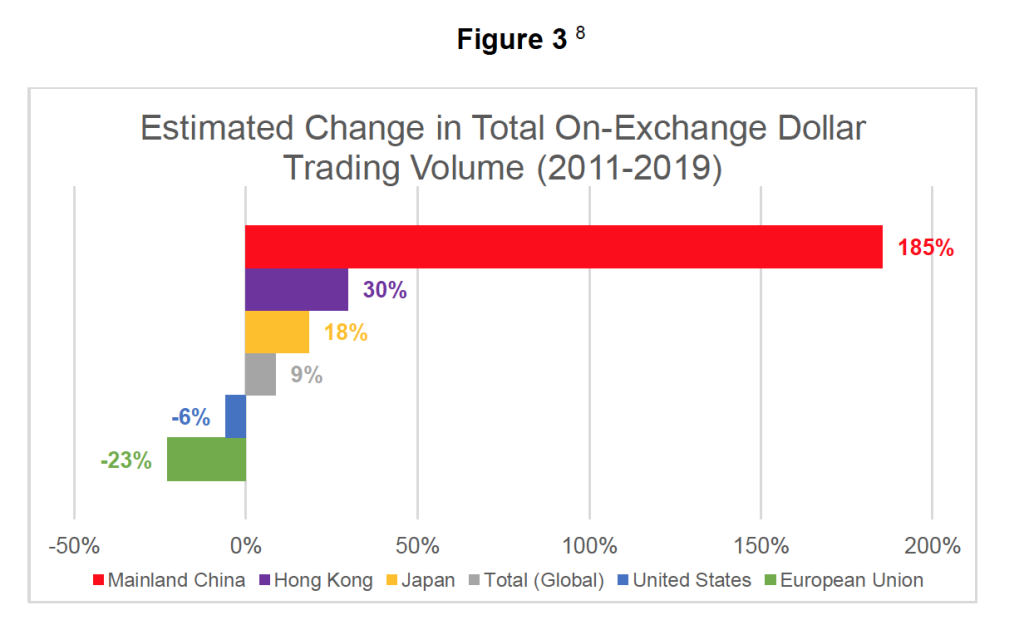 As demonstrated by Figure 4, the E.U., Hong Kong, Japan, Mainland China, and United States account for 74% of global public equity market capitalization as of end-2019. 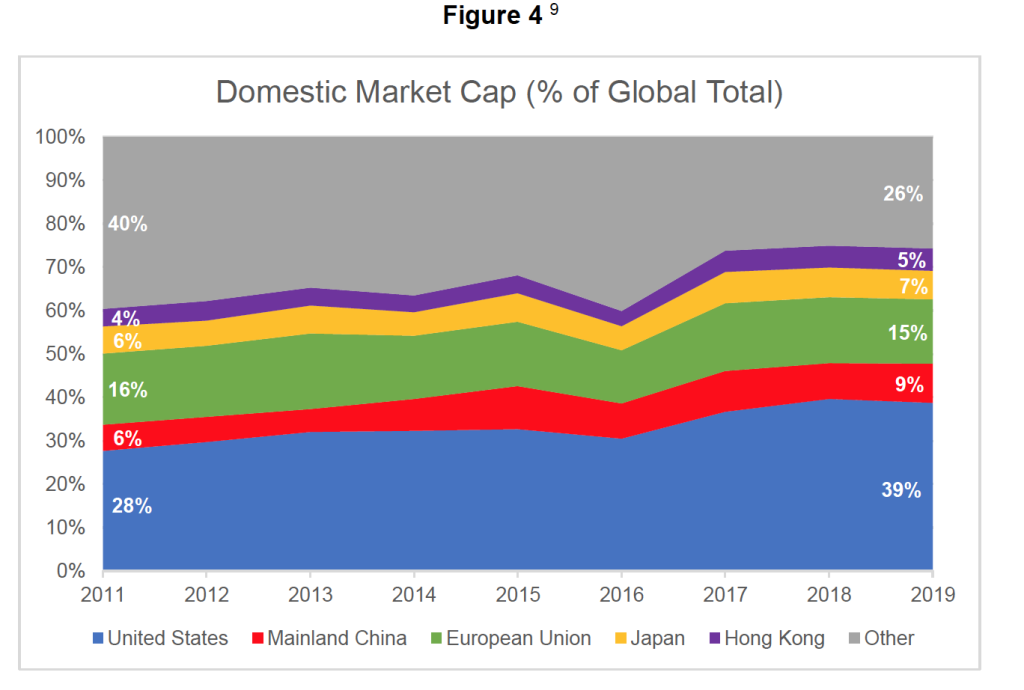 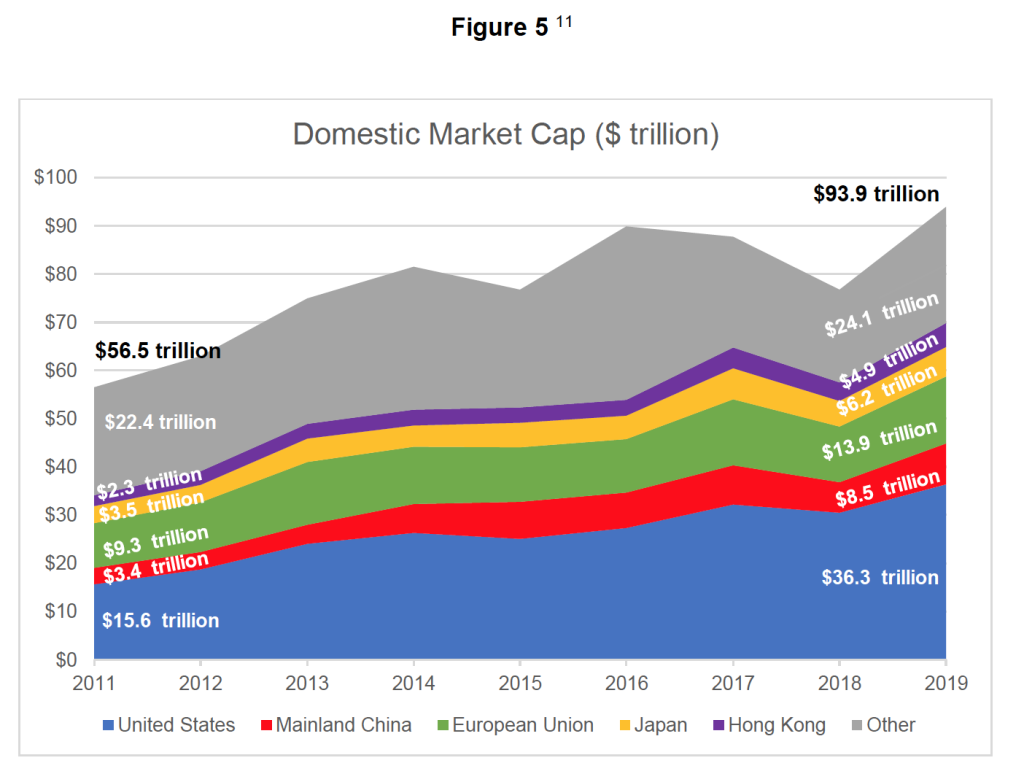 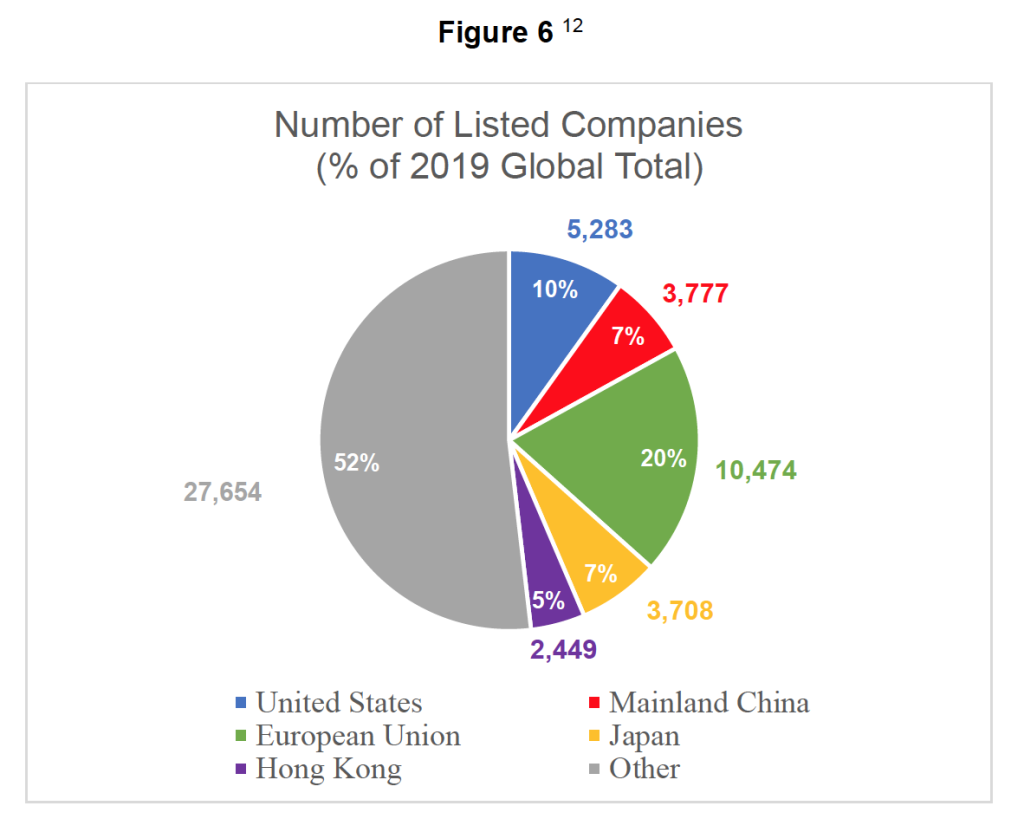 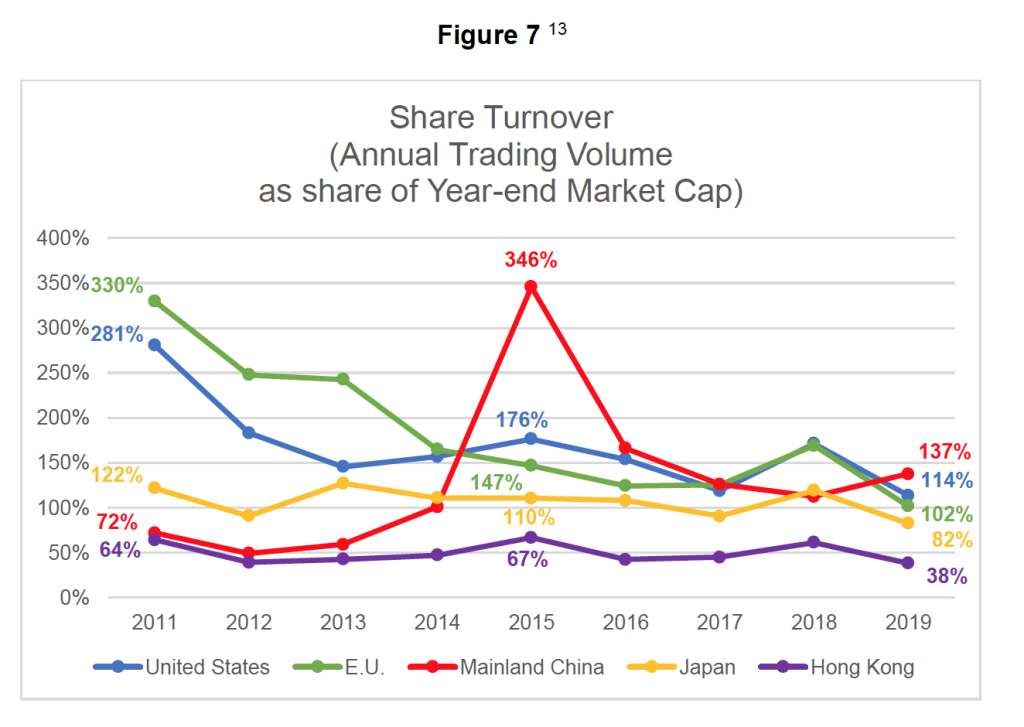 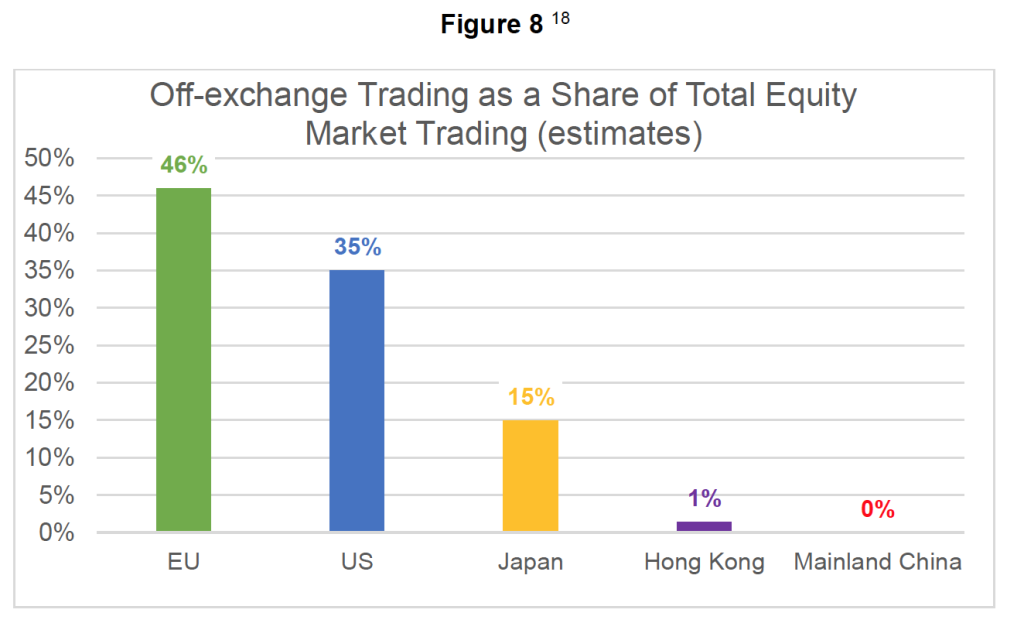 Multilateral trading facilities (“MTFs”) in the E.U. and alternative trading systems (“ATSs”) in the U.S execute trades off-exchange. Like exchanges, MTFs and ATSs match buyers and sellers, but they are not registered as exchanges and they are not the primary listing venue for public equities. Regulated market makers also execute off-exchange trades. These regulated market makers are referred to as systematic internalizers (“SIs”) in the E.U. and broker-dealer internalizers in the U.S. They do not match buyers and sellers but instead act as principals and execute customer orders against their own inventory of stocks on a systematic basis. As in the E.U. and U.S., off-exchange trading in Hong Kong and Japan takes place primarily on “automated trading systems” and “proprietary trading systems,” respectively, and through regulated market makers.

In the U.S., broker-dealer internalization accounted for approximately 70 percent of off-exchange trading by share volume in Q4 2019, with ATSs accounting for the remaining share. In the E.U., according to Rosenblatt Securities, SI trading accounted for just 14.3 percent of trading by value as of September 2020, while 18.7 percent of trading was conducted via MTFs and 21 percent of trading was over-the-counter, meaning that trades were non-systematic, ad-hoc, irregular and infrequent. It is important to note that there are doubts as to the reliability of E.U. statistical data as it pertains to SI trading volumes and off exchange trading more generally. SI trading volume data particularly, as acknowledged by ESMA themselves, may have been artificially inflated by the missreporting of some financial market participants due to a lack of clarity in the current regulatory framework requirements. This has resulted in a somewhat distorted picture and difficulty in ascertaining the genuine extent of SI trading volumes in the E.U markets which clearly also suffer from the lack of a consolidated tape. However, the real amount of off-exchange trading volume in the E.U. is likely to fluctuate substantially over the coming years as these issues get fixed, and a consolidated tape is implemented. 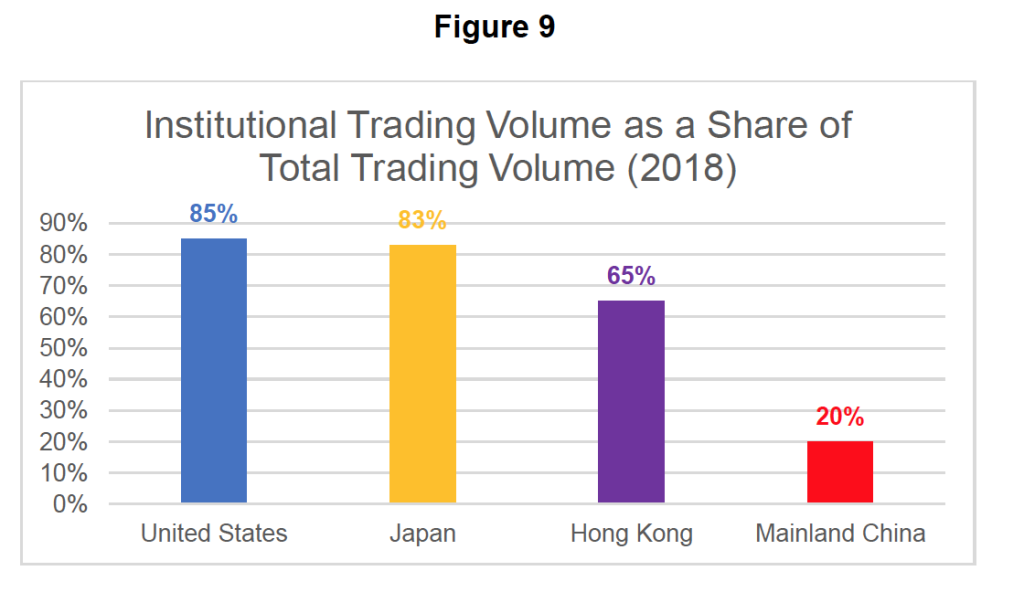 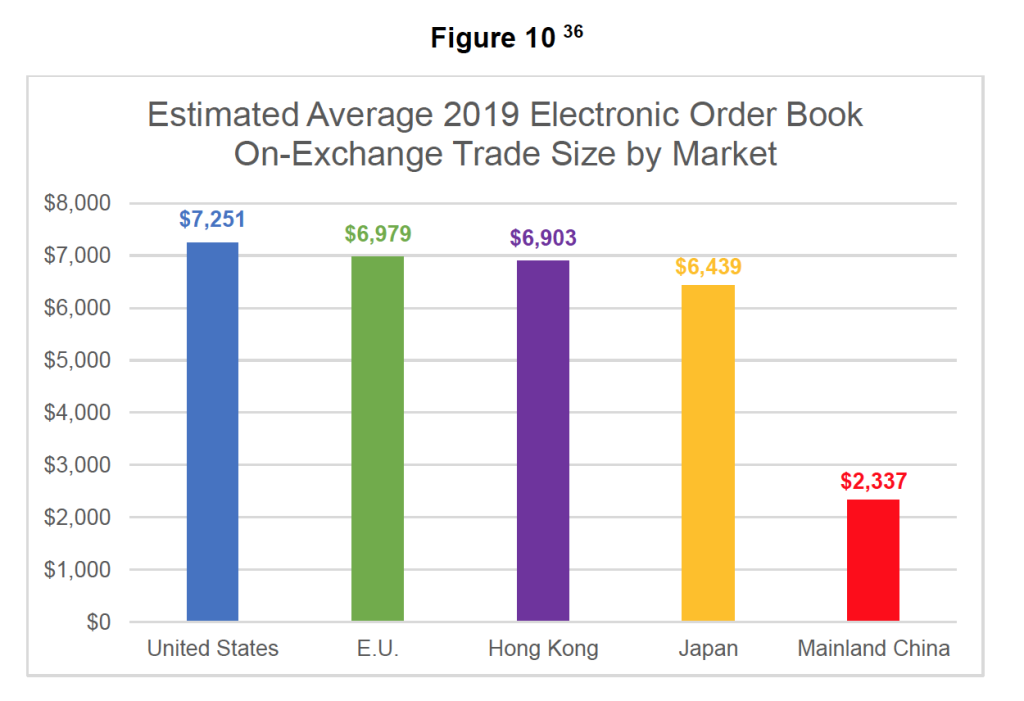 In Part II, we assess the performance of each market for investors based on institutional trading costs. We rely on data provided by Virtu Financial and AbelNoser—two leading global providers of transaction cost analysis data. We have not been able to identify data to compare retail trading costs across markets. We begin Part II by explaining the components of transaction costs for retail and institutional investors. We then summarize the Virtu and AbelNoser datasets and conclude by observing key similarities.

For retail investors, transaction costs include brokerage commissions and the bid-ask spread. Brokerage commissions entail the direct fees charged by brokers for executing an investor’s order. These fees can vary widely both within markets and across markets, particularly with U.S. brokerage commissions approaching zero for many retail orders. The cost associated with the bid-ask spread is slightly less straight-forward and best described with an example. Suppose that Security X is trading on an exchange with a best bid price of $9.99 and a best offer (or ask) price of $10.01. The midpoint of the best bid and offer is $10.00, which is the implied “fair value” of Security X. Next, suppose that Retail Investor A places a market order to buy 100 shares of Security X. This market order will execute on the exchange at $10.01, the current best offer, because given the small size of retail orders there is typically sufficient available liquidity at the best offer price. The cost associated with the bid-ask spread is the difference between the mid-point of $10.00 and the execution price of $10.01. However, as noted in Part I, in the U.S.,more than 90% of retail orders are executed off-exchange through broker-dealer internalization. These retail orders typically receive “price improvement,” meaning that they are executed at a price better than $10.01 in this example (i.e. closer to the “fair value” of $10.00).

For institutional investors, transaction costs associated with price impact are higher as there is typically insufficient liquidity at the best bid or offer to execute an order. The price impact for institutional orders is best described with an example. Suppose that Security X is still trading with a best bid of $9.99 and a best offer of $10.01. Further suppose that only 2,500 shares are offered at $10.01, while another 5,000 shares are offered at $10.02 and 2,500 shares offered at $10.03. For illustrative purposes, suppose that Institutional Investor B places a market order to buy 10,000 shares of Security X. Given the shares available, the order will be executed at $10.01 for 2,500 shares, $10.02 for 5,000 shares and $10.03 for 2,500 shares, resulting in an average execution price of $10.02 for the full order. The $10.02 execution price is 1 cent or 10 basis points (“bps”) higher than the $10.01 best offer that prevailed at the time of the order. This 10-bp difference is the additional price impact (often referred to as slippage) that occurs as a result of the relatively large buy order (i.e. the 10,000 share order is large relative to the size of offers in the market). Price impact costs are included in the Virtu and AbelNoser datasets.

Virtu estimates brokerage commissions and price impact cost by collecting trading data from over 180 asset managers on over $13 trillion in trades per year. Virtu trading costs and order size are a weighted average based on the value of shares traded. We note that for the Virtu data we review six markets rather than five, as Virtu separates trading cost data for the U.K. from the E.U. 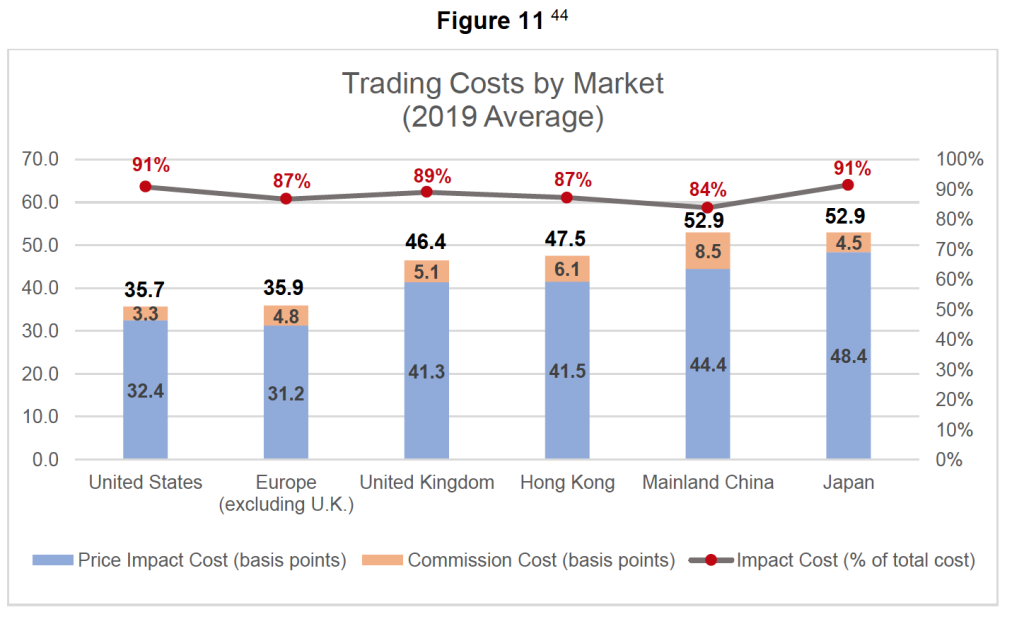 There was a substantial decrease in commission costs across all six major equity markets from 2015 to 2019. Figure 12 illustrates that average commission costs dropped between 27 and 42 percent in each market during this time. 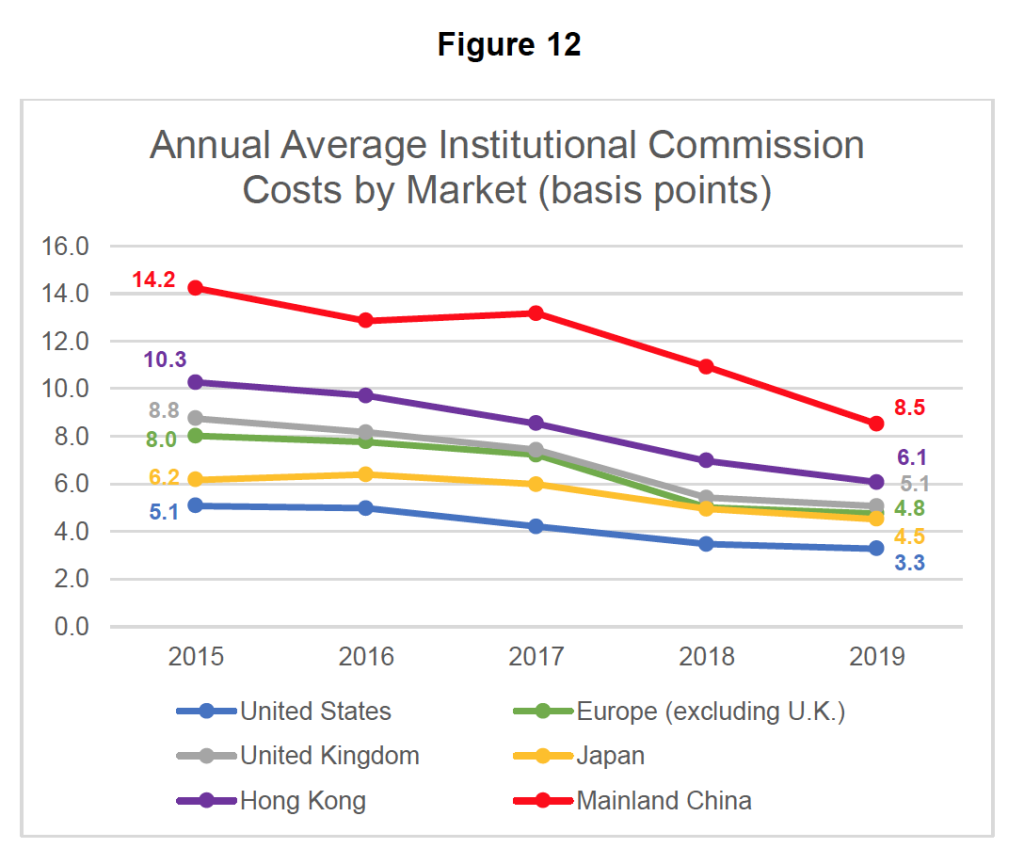 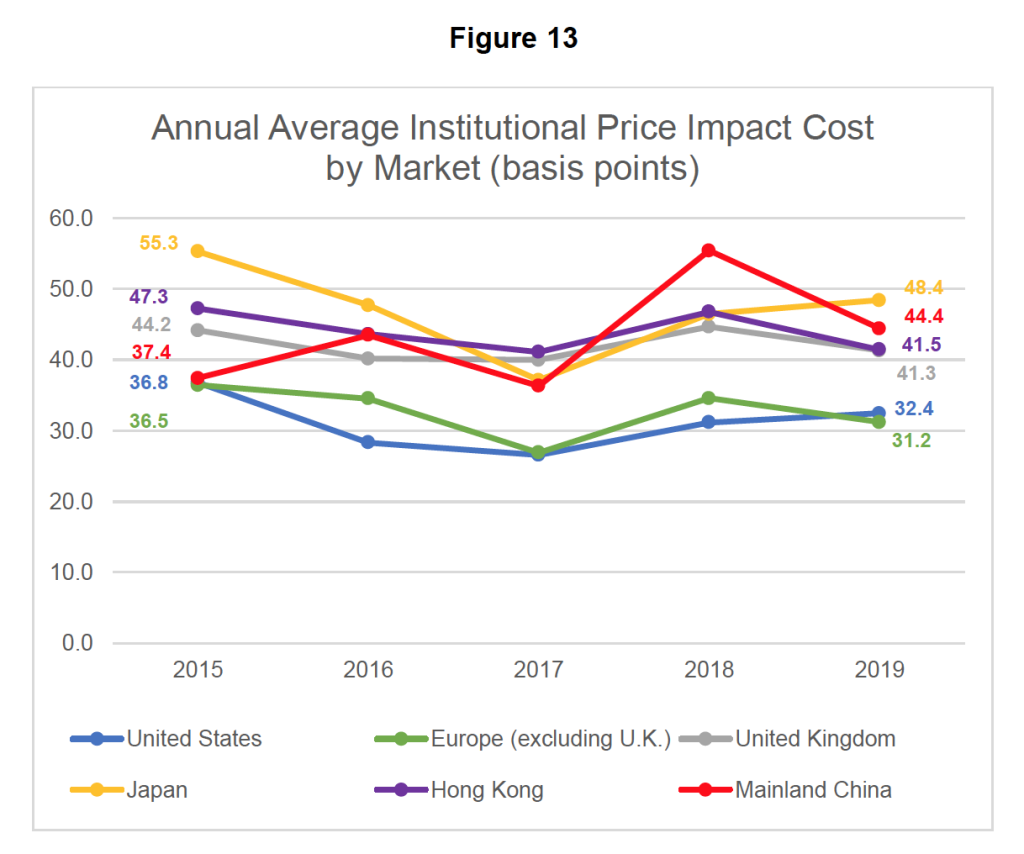 AbelNoser calculates trading costs by collecting data from over 200 asset managers and analyzing approximately $7.5 trillion in trading volume annually. AbelNoser trading costs and order sizes represent the median by value of shares traded. 47 Also, AbelNoser aggregates transaction costs for the U.K. and the E.U., so we review five markets: E.U. (incl. U.K.), Hong Kong, Japan, Mainland China and the U.S. We observe similarities between the Virtu and AbelNoser data sets at the end of our analysis.

Figure 16 sets forth overall institutional trading costs in each of the five markets in 2019 measured in basis points. The U.S. has the lowest total costs for institutional investors at 20.5 bps, followed by the E.U. and Mainland China (each 20.6 bps), Japan (22.7 bps), and Hong Kong (29.2 bps). Figure 16 also shows that price impact contributes between 62 and 79 percent of total trading costs. 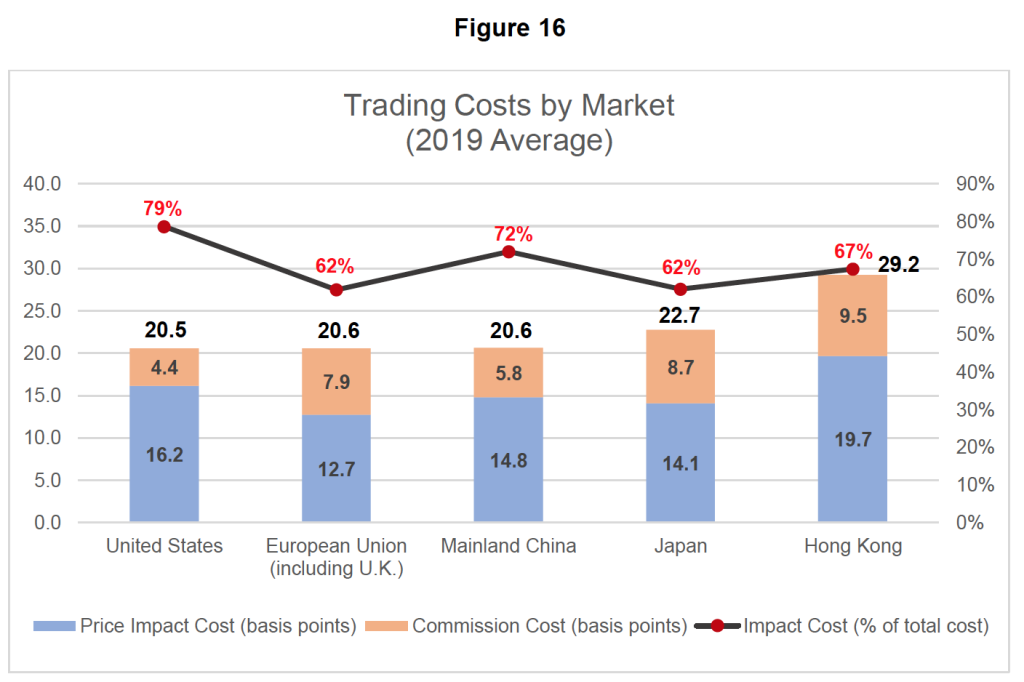 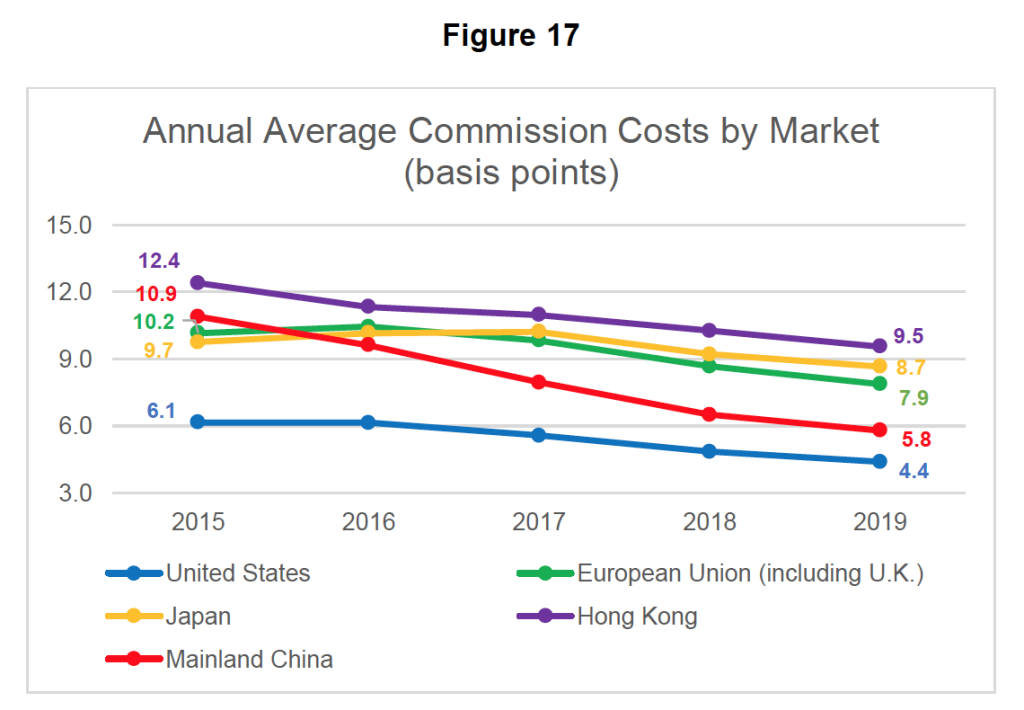 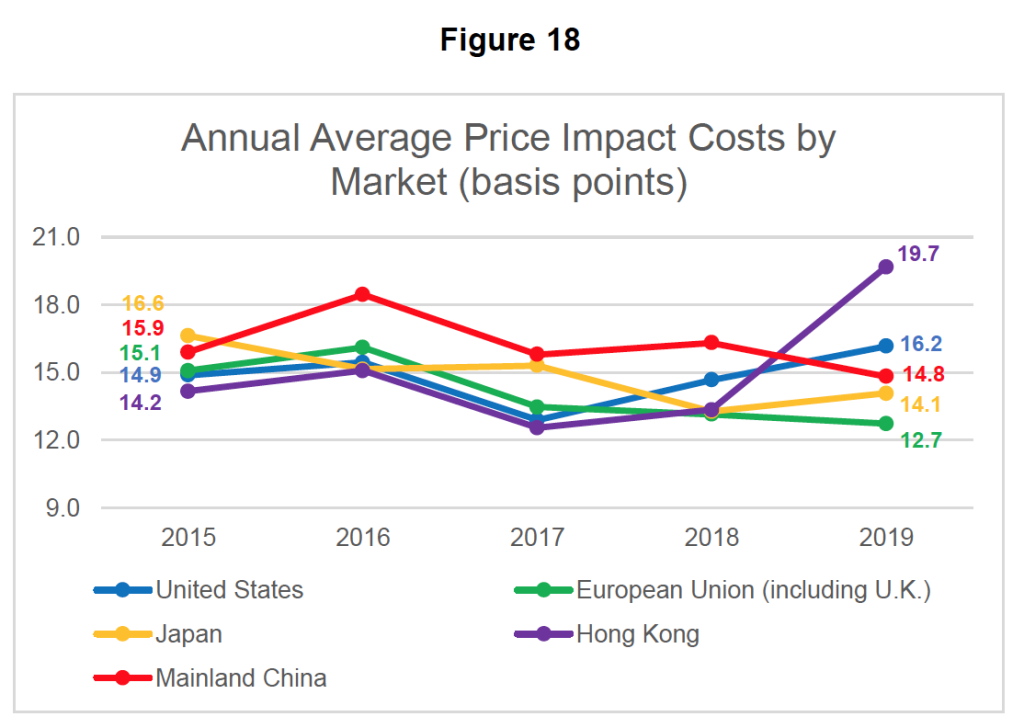 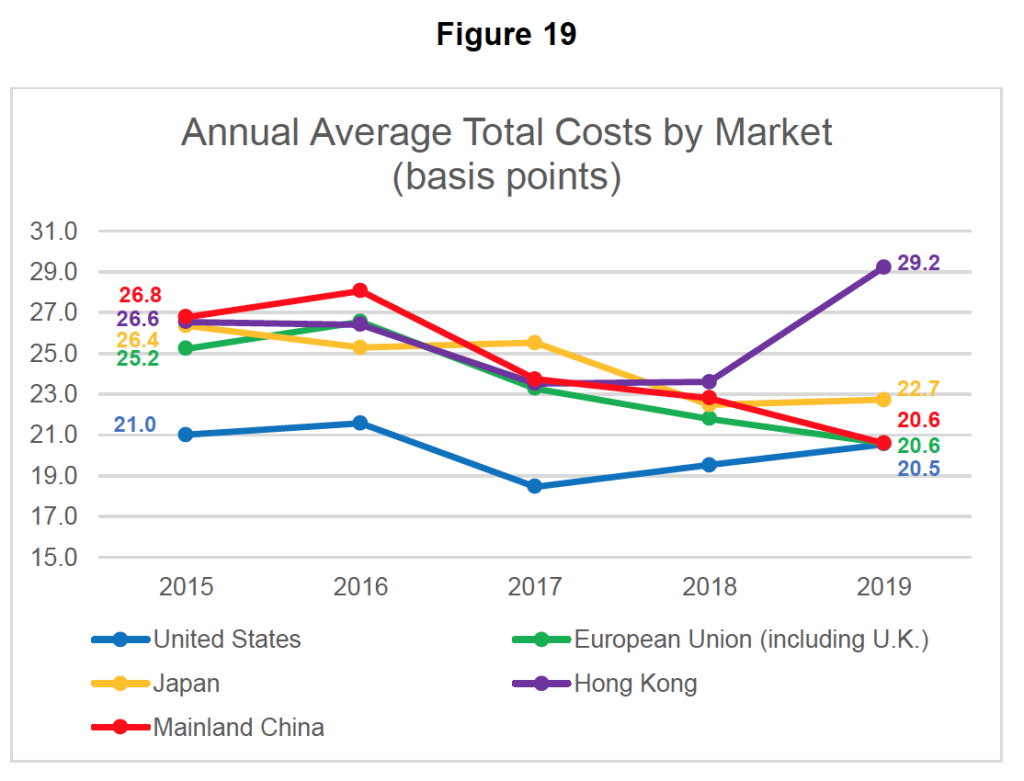 Figure 20 and Table 4 on the next page illustrate that from 2015 to 2019, the average institutional order size in the AbelNoser data set decreased across all markets with significant declines in Mainland China (-56.7%), Japan (-42.2%), the E.U. (including the UK) (-27.9%), and the U.S. (-20.0%). Hong Kong dropped more modestly with only a 14.0% decline over the same time period. We note that overall trading costs dropped alongside declines in order size in four of the five markets from 2015 to 2019, as expected based on the relationship between order size and trading costs, except for Hong Kong, where trading costs rose and the decline in order size was slight. 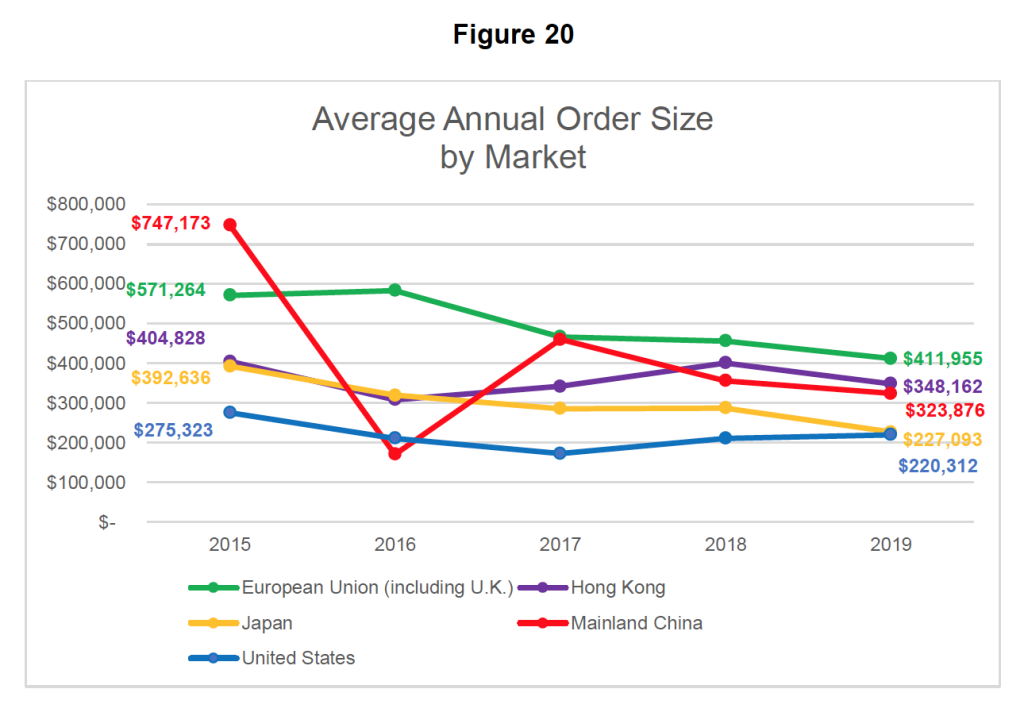 Comparison of Virtu and AbelNoser Datasets

One key difference is also apparent—trading costs (measured in bps or dollars) are substantially lower in the AbelNoser data, as compared to the Virtu data. However, this difference can be explained by the fact that the median order size in the AbelNoser data is significantly smaller than the average order size in the Virtu data. As noted earlier, smaller order sizes correlate with lower trading costs, and vice-versa.

In Phase I, PIFS’ International Review of Equity Market Structure Regulation, we reviewed the regulatory structure in the five major equity markets, including China (including both the Mainland and the Hong Kong markets), the European Union, Japan, and the United States.49 For each market, we summarized the regulation of trading venues, pre- and post-trade transparency, broker-dealers, exchange fees, tick-sizes, algorithmic and high-frequency trading, and volatility controls.

In Phase II, we set forth a quantitative analysis of trading in the same five equity markets. We summarized recent trends in trading volumes and market capitalization in each jurisdiction, including on-exchange and off-exchange trading, share turnover as well as instititutional and retail trading. We then reviewed institutional trading data from Virtu Financial and AbelNoser to assess the performance of global equity markets between 2015 and 2019. We also surveyed changes over that period in order size, brokerage commissions, price impact and overall trading costs in each market.

Cryptoasset Market Structure and Regulation in the U.S.

END_OF_DOCUMENT_TOKEN_TO_BE_REPLACED

Expanding Access to the Standing Repo Facility for U.S. Treasuries